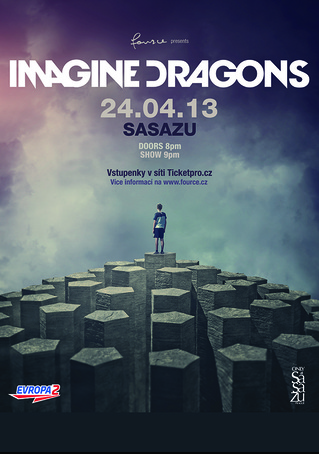 Tickets onsale from November 23 through Ticketpro

Indie-rock quartet Imagine Dragons is preparing for their international tour during which they will also visit Prague’s SaSaZu club on April 24, 2013.

The quartet will perform in Czech Republic for the first time ever. The name of the band, enticing to imagine dragons, hides an anagram that no one knows where it comes from, except the band itself. Imagine Dragons come from shiny Las Vegas, music wise they touch indie-rock, hip-hop and electronica – their compositions Demons, It’s Time or Bleeding out are energetic ballads about life swiftly turning to hits. And where else would you get the inspiration from than Las Vegas!

“I wrote ‘It’s Time’ during a very transitional period in my life,” Dan Reynolds, the groups’ drummer and vocalist recalls. “It seemed like everything was going wrong. I was trying to decide what I wanted to do with my life, trying to figure out how seriously to take music. I was making decisions about who I was. But I wrote that song just standing my kitchen stomping my feet and clapping my hands. I wasn’t thinking about writing a great song, I was thinking about what was important to me.” That balance between riding steady and risking it all is the core tension at the heart of Imagine Dragons’ sound and identity, and it’s a reflection of the city they call home. “Our band wouldn’t exist without Las Vegas,” Reynolds says simply. “It’s a great place for an artist to start out.”

The very first show of the Las Vegas Imagine Dragons is coming up on April 24 at Prague’s club SaSaZu! Tickets available through Ticketpro network.