END OF THE WORLD 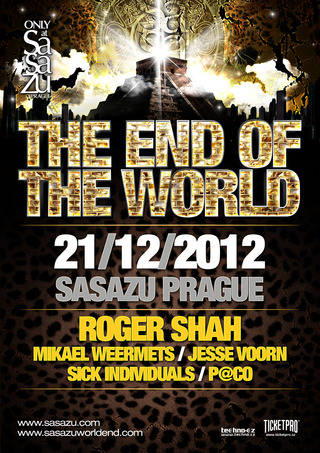 The End Of The World

Day of the winter solstice in 2012, will not be the same as all was before.. Or any day after this, will not be as same as ever. Exactly 21st December 2012 comes to one end - the last of the thirteen Baktun, followed by a rewind to the point "0". Tohoku earthquake and subsequent tsunami crushing Japan, megastorm Sandy devastating New Jersey and New York, but also the growing unrest in the Gaza Strip, these are only hints and clues about the mystery of the end of the world as we know it. The earth, Sun and center of the Cosmic Mother, that the Milky Way enters into 21.12 exact position of the line, which changes the established world order not only by the ancient Mayans. Sources can be found even in the ancient Egyptians, the Maori, the Hopi Indians, Nostradamus, in the Indian Vedas, but also in the Bible and its Revelation. it is absolutely necessary to take one - but its not to be afraid of the emotions from all these sources that we are beyond our world to pay! It will be the current collective state of mind, that will shape a new world. Humanity will continue, but one completely different way. Our gate and path will be SaSaZu!!! Instead of anxiety and loneliness home, instead of gray streets and fear, we will be ready at the end of our world in a completely positive mood, full of love and belonging, exactly in the right frame of mind and only possible for the next world and the preservation of humanity in its pure form. As the only place on the planet will be just in SaSaZu - guarantee of positive energy and noblest guides purely with Roger Shah, Mikael Weermets, Jesse Voorn, Sick Individuals and P @ CO. It is their powerful music and energy set the minds of all those present in the single wavelength ready for a turning point. No turning back. Participation is entirely up to you. End of the world doesnt not wait!

Dutch dance wave of talented producers and DJs seem to die down until the very end of the world. Thanks God!

One of the latest fresh additions in their ranks is Jesse Voorn, who was recently employed by collecting reputation with labels such as Stealth by Roger Sanchez, Robbie River's Juicy Music, Strictly Rhythm, Spinnin Records, We Play and many others. Issue compositions Magic Is All Around by Stealth Records is a clear confirmation of his talent, and even prior Somewhere outdone, though to grab yourself one place renowned in DMC Buzz Charter. Recognition of the giants was not long in coming. Roger Sanchez, Robbie Rivera, Tiesto, David Guetta, Fedde le Grand, Kaskade, Pete Tong, Bob Sinclar, Axwell and many expressed support for Jesse while he was working on remixes for stars format Erykah Badu, Deadmau5, Robbie Rivera, Micha Moor, George Acosta, DONS, MC Flipside, Electrixx, Tune Brothers, Kid Massive and Seamus Haji. Noteworthy also Jesse's own radio show Jesse Voorn Radio, broadcast in more than 20 countries. In the last years Jesse has traveled dance floors from Miami to Dubai and from Sofia to Ibiza and Moscow. Next stop: SaSaZu Prague, December 21, 2012, The End Of The World