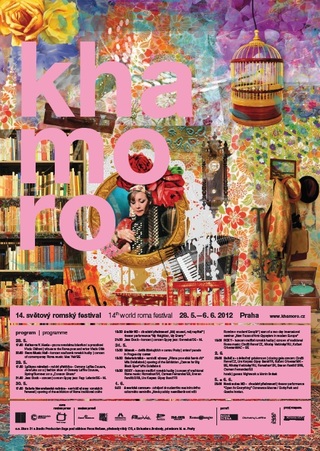 CARMEN FERNANDEZ / ES Carmen Fernandez stems from a famous flamenco family. She started off as a dancer, but ended up becoming a singer – always faithfully interpreting the ancient flamenco traditions. Still she succeeds in adding a most personal touch to her music. Her powerful and touching voice made her into the public’s favorite in many a Spanish flamenco peña, as well as on numerous festivals in Germany and the Benelux.

ROMATHAN / SK Romathan (“Place for Roma”) Theatre has its residence in Košice and was established in 1992. Essential part of theatre performances is the incidental music composed by Roma composer, especially by the current Romathan director Karel Adam, musical director and virtuosic violoinist. In the frame of Khamoro festival he will lead the ensemble of fifteen musicians, singers and dancers. Theatre Romathan has successfully performed at many events in Slovakia, but also in England, Czech Republic, Hungary, Poland, Russia and France and has been awarded by many prizes.

STEVAN FAMILIC / SRB Stevan was born in 1993 in Novi Sad in the family of musicians. He started to play on the stringed instrument tamburica since he was 8 years old; he was taught by his grandfather, one of the most famous tamburica players in Serbia. Stevan participated in various musical competitions across the Serbia with a great success. The preformance at Khamoro festival will be his second foreign presentation and will perform here with his group.

URS KARPATZ / FR Urs Karpatz is far from being an ordinary Gypsy group. Initially on the path there is a man Dimitri. Fueled by his passion for the nomadic people, he will follow the trail of Gypsies across all European countries for 20 years. So was born the group Urs Karpatz (Carpathian bears) in 1993. The enthusiasm of the public will be steady since then, either on the Parisian stage, or on tour in France, Europe, America, and Asia. The group has performed at nearly 2000 concerts and released 10 albums. You will discover with emotion the sacred voices of Urs Karpatz.

CINDŽI RENTA / CZ Group of 5 musicians from Český Krumlov lead by the bandmaster Michal Kotlár presents the traditional Roma music, but differs from other groups with the unique and humble interpretations, which reminds the jazzmen, who revere roots of their music, but at the same time add their own emotions and feelings. This fact is confirmed also by the bandmaster who says: “Cindži Renta history extends to our ancestors. Some of us played with our grandfathers and thanks to this fact the group was established. The music we play is not based on the musical education, but there is a lot of passion and energy in it.”

KOÇANI ORKESTAR / MAC - BE The band's trademark thundering style soon became very popular: their powerful rhythm section, their passionate soloists, and the sheer funkiness of their beats would lead any audience to break into dance… despite the fact that Koçani Orkestar uses many asymetrical rhythms. Koçani Orkestar has performed at many major world music festivals around the world. They have collaborated with Italian singer Vinicio Capossella, with jazz trumpet player Paolo Fresú, and with Taraf de Haïdouks, who invited them to Bucharest to perform on their Band of Gypsies live album.

NIKOLAY VERBITSKY / RU Nikolay Verbitsky is considered one of the best guitarists of his generation. He comes from the Russian family Verbitsky who are well known singers and dancers. Nikolay has also played in a very popular group in Russia called Ilo. He has appeared in many TV shows, movies, recorded CDs with various artists and represented Russia in many festivals around Europe and in USA.