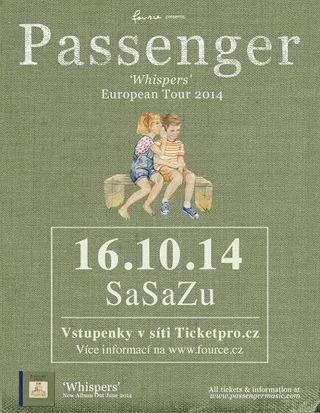 PASSENGER AT SASAZU THIS OCTOBER!

Prague, April 14 -- Autumn may seem far away but we can ensure you fans of folk and indie rock won't weep their gloomy days away. On October 16, Sasazu club in Prague will be greeted by the shy voice of Mike Rosenberg whom you might better know under the stage name Passenger. Tickets for this great show are available via Ticketpro starting April 25.

Passenger will perform in Prague for the first time in his career. His fans will surely appreciate some brand new stuff from his upcoming album as well as the hit single Let Her Go for which he was nominated for Brit Awards' single of 2013.

During its 10 years of history the band has seen many changes. However, its main signature - the incredibly soft, melancholic voice of its frontman, Mike Rosenberg - still remains until this day. In 2009 the band dissolved, but Rosenberg decided to keep the moniker, being the author of many of lyrics. He has recorded 5 albums so far, and the next good news is, a sixth one is on its way in June this year. It will be called “Whispers” and you could already hear its first single, Scare Away The Dark.

His most successful single called Let Her Go was released by Passenger in July 2012. It climbed to the top of music charts in 16 countries (including Czech Republic) and its eternal fame was secured when featured Budweiser's Super Bowl commercial last year. Those 252 million YouTube views are not a coincidence!

If you wish to scare away the autumn greyness with some indie-folk chill, this show is just perfect for you. Tickets will be available starting April 25 via Ticketpro network.