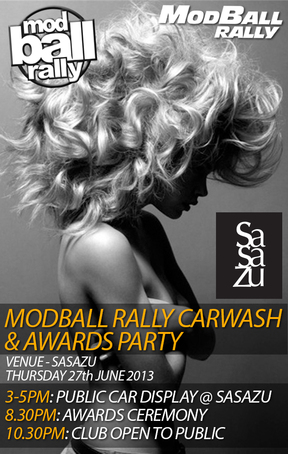 On the final day of the European Modball Rally all 180 cars will be on public display to the general public outside our final party location SASAZU.

Inside this superclub will be a small selection of cars from the rally. These cars will be used for the CarWash party that night and they will be washed by the Modball Girls.

Sasazu is the location for the Modball Rally awards party which will take place before the club opens to the public.

We would like to invite all of the general public to this fantastic day to meet all of the Modballers at the end of their journey across Europe. Members of the public will get to see all of the cars on display from 3-5pm and will be able to join the party from 10.30pm inside Sasazu to party with the Modballers.