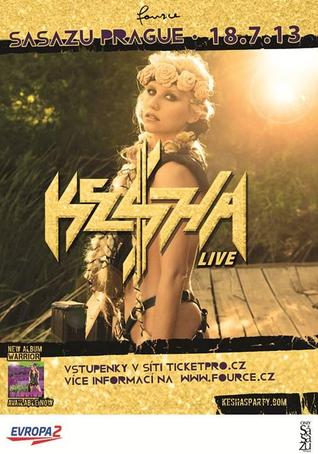 KESHA UNCHAINED IS COMING TO PRAGUE FOR THE FIRST TIME IN JULY 2013!

American singer and rapper Kesha (25) from will visit Prague for the first time during her upcoming European tour! Her concert will take place in Prague’s club SaSaZu on July 18! Los Angeles-born singer is always very determined to reach her goals. She says: „I’ve always known I was going to be a rock star and there’s no way anyone was going to stop me.“ And so it is. During her brief career as a singer she has been already nominated for the prestigious music awards more than fifty times and she has won 14 of them. She is a hard worker, she composes her own music and she is responsible for several hits of her industry colleagues, Britney Spears and Miley Cyrus. She broke through in 2009 when she appeared as a guest on Flo Rida’s single Right Round. Since then her star of fame is soaring. Her debut album Animal became the number-one album in the US. Her mega hit TiK ToK became the best-selling single by a female solo artist in digital history. After Die Young’s success from her current album Warrior, her latest hit C’Mon is now rocking Czech music charts. Her lyrics are often about parties and booze. It’s no secret that she likes to shock people but she also has her gentle part. „I want my music to be fun, unapologetic, rowdy, quirky, humorous, and interesting. But there must be something else. I want people to listen to it and feel like they can relate,“ Kesha, or Ke$ha, says about her work. Her energy is endless and her voice remarkable. Get your tickets for the first show of Kesha in Prague now! The show comes up on July 18 at SaSaZu!

Support acts are two local artists: singer MISTA and singer and rapper RAEGO. RAEGO and MISTA were both selected and approved by management of singer Ke$ha.

Mista belongs to the most played teenage-artists in Czech and Slovak radios. She’s originally Slovak, but has lived in Czech Republic for a couple of years now. She has just toured China and has released a new album with her top single Feel the Breeze. She sings in English and belongs to our most international artists - for example her single Cash out was written by the British producing duo WaWa and Marius Moga, who wrote it originally for Ke$ha!

Raego a successful self-made man, rapper and singer cooperating with many interesting artists, his singles have incredible success in the online world. For example, his newest single Ty a Já has over 6 million views on YouTube. Raego sings in Czech. “I am very happy to have a show before such an international name and I am really looking forward to the show’s atmosphere - such an honor!” said Raego regarding the upcoming show.

The main media partner for this show is Radio Evropa 2.

Main media partner for this show is Radio Evropa 2.