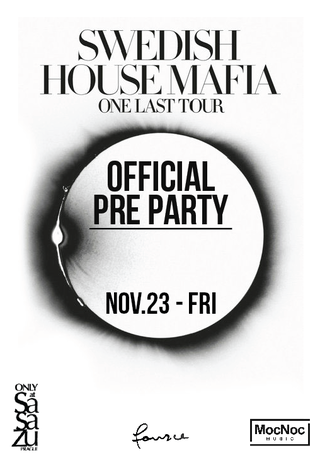 Swedish House Mafia is a Swedish elektronik dance music trio consisting of three house disc-jockeys and producers; Axwell, Steve Angello and Sebastian Ingrosso. The group officially formed in late 2008. The supergroup places at number ten on the DJ Magazine Top 100 DJ Poll 2011 and 12th in 2012. On june 24, 2012 the group announced via their website that their current tour would be their last together tour. In 2012 Swedish House Mafia won an EBBA Award.

We are proud to announce the Prague leg of SHM Worldwide tour.

Since its their last worldwide tour, the Pre Party will be highly emotional as well as their LIVE SHOW as the band bid a farewell to their fans across the world and promises to create unrivalled memories for fans and band alike. A special and spectacular finish for those who came, raved and LOVED..

At SaSaZu 23th of November we welcome you for the real celebration of joy of their music in a proper way with the best Czech DJs..

During the night you will have possibility to have more info for the Official Live Concert of them which will take place at O2 Arena on 29th of November.. For more info: https://www.facebook.com/events/418003038262200