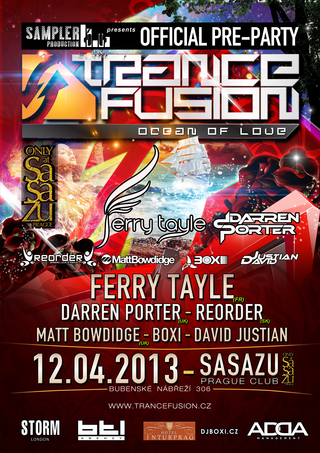 Get ready for a new hot party!

Next edition of traditional TranceFusion is coming up. Spring 2013 edition is titled "Ocean Of Love" and an event of such scale indeed calls for Pre-Party. It is in hands of experienced Sampler Agency once again in cooperation with many professional partners such as STORM London, BTL Agency, Hotel Inturprag or ADDA Management. This all is taking place in the best club in Prague, SaSaZu, on Friday April 12th 2013. Look forward to a really interesting line-up introducing not only domestic but also foreign shining stars. These include Ferry Tayle, Darren Porter, ReOrder and Matt Bowdidge. And domestic big names Boxi and David Justian will be introduced here.

Let us introduce each DJ to outline the night. Ferry Tayle (FR) French producer & DJ Ferry Tayle was born in 1982. His first musical experience was with jazz. He started playing the saxophone at the age of 7. He became interested in electronic music by discovering Jean-Michel Jarre's first album. After 14 years of jazz music he decided to move into electronic music. He bought his first decks in 1999 and began to DJ. In 2000, he took his first steps in his professional development in the biggest club in the east of France called "Le Colysée". In just one year he had the chance to share the decks with some big names like Cosmic Gate, Darude, U96 and very well known French house DJ, David Guetta. Darren Porter (UK) From the humble surroundings of the north east of England, near Newcastle, Darren Porter began his musical journey experimenting with keyboards and pianos and without the ability to read music and not one music lesson he was able to learn what made music work, from this he began to write small film scores for independent short films, but his real passion lay with electronic music. 2012 saw Darren explode with a flurry of remixes and originals and caught the attention of big game players even earning himself a worldwide twitter trend for his track “foundry” while been played and supported by Armin Van Buuren. to further his progression Darren remixed one the biggest vocal tracks of the summer of 2012 Sean Tyas feat. Lo-fi Sugar – The world which caught great reviews and was played through the world during the summer festivals. In 2012 Darren has completed number 1 track Foundry, collaborated with Manuel Le saux and Ferry Tayle and unleashed his biggest track to date “tesla Effect” with Gareth Weston, also playing live and now starting his tour on the scene as a live performer Darren Porter has truley stamped his foot on the scene and is sure to keep rising. ReOrder (SK) ReOrder was born in Martin, Slovakia in 1984. His preferred style of music is uplifting & progressive trance. He started with music production at the age of 14. Initially he tried producing many styles but trance was always the one for him. Finally in 2006 he started to focus only on trance production and trance music. As a DJ, Reorder has played alongside the DJs like Daniel Kandi, Eddie Sender, Filterheadz, Stoneface & Terminal, RE:Locate, Sonorous, Nifra, Milan Lieskovsky, Kamil Polner, Lange, Jon O’Bir, Mike Koglin, Dominik De Leon(FKA Dumonde), Steve Morley, Jessica B, Jay Stone, Ali Wilson, Steve Allen, Akesson, Anguilla Project and many more. Matt Bowdidge (UK) Matt Bowdidge is quickly becoming one of the most recognisable and exciting new names in trance music today. Since bursting on to the international scene a few years ago, the Australian to UK import has been defining his sound of uplifting and tech melodies, sublimely fused with pounding base lines, that has seen deserved support from many of the world’s most established producers and DJ’s. As one of the most likeable, passionate and hardworking artists in the scene right now, Matt has had multiple releases on legendary UK Trance Label ‘Discover Records’, which has seen him propel very quickly up the trance ladder. Boxi (CZ) After joined DJ set with Boxi, British producer, huge DJ talent and favorite of Armin van Buuren, James Dymond stated : "I did a 1.5 hour set then ended up going B2B with Boxi for the last hour which was sick!" Boxi is known to the Czech audience especially due to WARM-UP TOUR and legendary Trancefusion PRE-PARTIES held in Clubs Mecca or Touster or last but not least thanks to the project IN Trance, where he shared the DJ's post with world's famous Artento Divini (NL), Jorn van Deynhoven (NL), Daniel Kandi (DK), James Dymond (UK), Temple One (UK), Arctic Moon (PL), A.R.D.I. (PL) a and many more. Boxi's style stands between uplifting and hard trance. David Justian (CZ) David Justian (initials D.J), was born 1988 and comes from Central Bohemia. Since his little childhood he was educated at music and took private piano lessons. Around 1997, he began to feel dance music when he by chance participated the local event in Netherlands. Afterthat he started to be concerned and keen about dance music, as far as by the end of 2000 he sailed in music industry himself and started to work on creating his own production. Let´s say, from the really start, it was more commercial music. As he was bored after certain time he fell for underground. In his sets we can find deep trance sounds, from house, electro to progressive style. Entry fee: 90 CZK with a Trancefusion Ticket! Others 190 CZK Partners: STORM London - http://www.stormwatches.cz/ BTL Agency - http://www.trancefusion.cz/ Hotel Inturprag - www.hotelinturprag.com ADDA Management - http://www.addamanagement.com Boxi - http://djboxi.cz/ This is gonna be a huge party. See ya in SaSaZu!