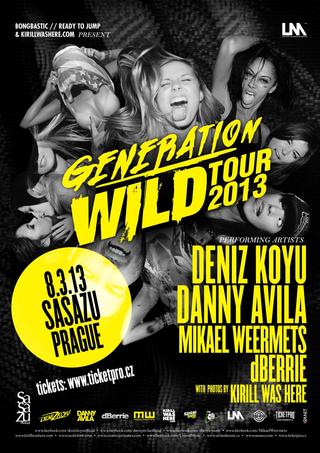 After a USA tour during February and visiting 25 cities in 25 days, the Generation Wild tour 2013 is hitting Prague at club Sasazu the 8th of March 2013. Generation Wild is four extremely talented young DJ's from all over the world, joining forces for an adventure that is destined to be one of a kind. And as if that is not enough, they will be accompanied by one of the most notorious and talented live music photographers out of the USA knows as Kirill, who will capture your wildest moments and put it on-line at a special for Wild Generation created website. Generation wild is not only about the DJ's but also about an audience that is hungry for house music with an extraordinary lifestyle who like to get wild once in a while. Generation Wild is an collective, ready to explode with you being part of it. The performing artists who will guide you through a wild night are:

DENIZ KOYU Deniz Koyu has without doubt proven to be one of the most promising talents to watch out for. 2012 was a massive year for Deniz with a string of groundbreaking releases. His original productions „Bong“ and „Follow You“ and his impressive remixes for David Guetta, Miike Snow and Digitalism topped the charts everywhere and are cornerstones in the sets of superstars such as Swedish House Mafia, Tiësto, Fedde Le Grand and many others. Deniz Koyu will kick off 2013 with two huge releases. „Halo“, his much anticipated collaboration with Dirty South on his Phazing imprint as well as the follow-up to the uber-hit „Bong“ which will be called „Rage“ and will be available in February on Ingrosso’s Refune Records. 2013 will be another Koyu year for sure. www.facebook.com/DenizKoyuOfficial www.twitter.com/denizkoyu www.instagram.com/denizkoyu www.soundcloud.com/denizkoyu

DANNY AVILA At the grand old age of 17, Danny Avila has become one of the hottest acts in the world of EDM. From winning the ‘Best Newcomer DJ’ at the prestigious 2011 Vicious Music Awards at just 16, through an incredible 2012 Ibiza season that caught the attention of everyone including Tiësto and dance bible DJ Mag where he became the youngest ever Covermount CD artist, to the announcement of his residency as the youngest ever prime-time DJ on US broadcasting behemoth SiriusXM, Avila is the name on everyone’s lips – and he is not done yet. After the release of his first single „Breaking Your Fall“ on Big Beat Records, 2013 will see him rising to dizzy heights. Already on the Billboard „21 under 21 to watch for“ list, Danny Avila is also tipped as an artist to watch for in 2013 by dancingastronaut.com. In February 2013 Danny Avila will be releasing a new mix album on Ministry of Sound. www.facebook.com/dannyavilaofficial www.twitter.com/DJDannyAvila www.soundcloud.com/dannyavila

DBERRIE With a distinctive deejaying and production style, dBerrie draws heavily on the breadth of musical genres on which he was raised to craft his progressive house tracks. dBerrie's records have gained support from heavyweights including Fedde Le Grand, Paul Oakenfold, Ferry Corsten, Sidney Samson, Deniz Koyu, Swanky Tunes, Sultan & Ned Shepard, and Gregori Klosman. Releases on Ultra Records and remixes including Gotye's "Somebody That I Used to Know" and Adele's "Rolling In The Deep" have established dBerrie as a favorite of house blogs worldwide and a rising star in the dance community. www.dberrie.com www.facebook.com/dberriemusic www.soundcloud.com/dberrie

MIKAEL WEERMETS Mikael Weermets has grown into a powerful brand in the electronic music business. Late 2011 he signed with record giant EMI and the path of success is going strong for the 26 year old Swede. With numerous remixes on the biggest dance labels in the world, a dozen of massive collaborations and a pending debut album on Kontor Records, the Swedish DJ is holding one of the most busy calendars in the business, traveling all over the globe to perform and show the world that he is one to watch in the coming years. Oh, and did we mention he regularly releases on Tiësto’s Musical Freedom imprint? www.facebook.com/MikaelWeermets http://twitter.com/mikaelweermets www.soundcloud.com/mikaelweermets

KIRILL WAS HERE Described by MTV as "the most prominent nightlife photographer in America," Kirill Was Here has fast become as recognizable as the celebrities that he shoots. Just two years removed from sneaking into parties, New York-based Kirill is now a fixture at the most high-profile events in the world and at the most recognizable nightclubs. Kirill gives nightlife the edge it needs to be completely fun. Complex Magazine ranks Kirill Was Here #5 in their „50 greatest music photographers right now“ list. www.kirillwashere.com www.facebook.com/iloveKWH

VLIGHT.TO VJ TEAM The Vlight.to VJ team from Germany will support the night with the wildest tailor made visuals.