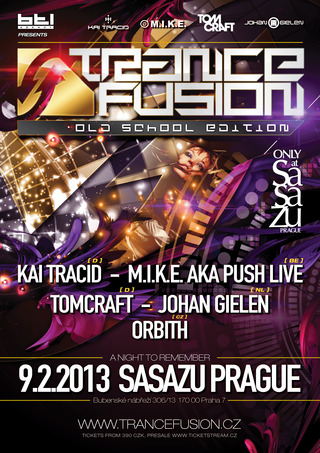 "A real trance-bomb called "OLD SCHOOL EDITION" is heading to Prague in February 2013!"

BTL Agency announces another special edition, this time a very extraordinary and unexpected one! During one night you'll enjoy a very rare OLD SCHOOL edition that will bring you the greatest hits of some world-class djs. All of them will be ready to show you the best what you can imagine when saying "old school"! And which matadors of the dance scene this night will not let you just hang around in peace?

KAI TRACID After Kai’s performance at TRANCEFUSION Autumn edition, we have received literally hundreds of positive reactions, in which you have been requesting his performance at one of the future Trancefusion’s club editions. We are now happy to announce that this wish of many trance clubbers will become a reality! In the autumn edition, Kai has captivated everyone with his mind-blowing old school set, where he played many of his iconic tracks, but not all by far have been played, so please be prepared for another portion of the biggest old school classics presented by the trance guru himself!

M.I.K.E. aka PUSH – live M.I.K.E. is one of the greatest figures of the trance scene and well-rounded artist, who has worked with many artists such as Sinead O'Connor, Moby or Depeche Mode during his rich career and now is producing a film music. It has been a very long time since he played a pure old school trance set here, but who wouldn’t miss his legendary trance tunes like Universal Nation, Strange World or The Legacy?! This belgian dj and producer, whom you may know under this other aliases Plastic Boy or Absolute, will be further piece to the mosaic of this party’s line-up.

TOMCRAFT The first international guest presented to you at TRANCEFUSION Old school edition is a german dj and producer TOMCRAFT.
It has been exactly 10 years, since this originally trance dj, who has also moved to other music genres during his carrier, released one of the biggest club anthems ever - a track called Loneliness. His other big hits, such as Prosac or Overdose, likely need no introduction as well. During his carrier he has played at the most prestigious dance events all over the globe and in recent years he is coming back to the scene with his new projects.

JOHAN GIELEN Who of the true trance fans wouldn’t know the legendary anthem of Trance Energy 2001 “Twisted”, produced by the duo Svenson & Gielen? This duo established itself as a resident of Trance Energy and we have invited one half of it, Johan Gielen, to perform at the february’s TRANCEFUSION Old School edition! For sure other smashing hits, on which he participated, such as The Beauty of Silence, remix of classics of all classics “Silence” from Delerium, or another immortal track “L’Esperanza”, under which he is signed in his another project Airscape, will be played during his set. Johan will end this unique night so expect the real trance thunder at the end of this party! ORBITH The first guest of the night presented to you will be a czech dj ORBITH. You may know this legend of the czech club scene, one of the pioneers of electronic dance music in Czech Republic at his time, from many events and festivals, such as Summer of Love, Creamfields, Mayday, Cosmic Trip etc. He is also very well-known for his resident party “Elektra” which has brought many great international names to the Czech during it’s time.

TRANCEFUSION – the right transfusion into the veins of the Czech dance music! Get it and be reborn!