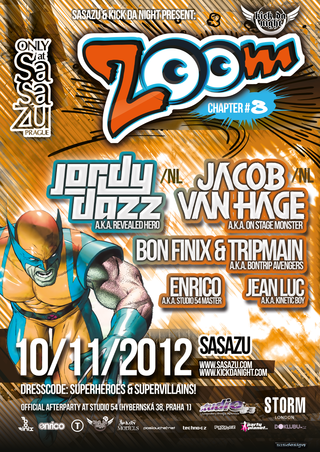 Jordy van Oostveen, better known as Jordy Dazz (and formerly Jordy Lishious), a young Dutch DJ/producer, has been climbing the charts and gaining notoriety for his “Big Room” House productions and remixes all year. At the beginning of 2011, Dazz made his debut on Hardwell’s Revealed Recordings with the release of “Lump,” a deep, techy, Progressive House track that gained support from the likes of Tiesto, Avicii, Swedish House Mafia, Fedde le Grand, Armin van Buuren, Dada Life and many more. With new releases out this year and a booked calendar full of music festivals and nightclubs alike, it’s time to get keen to this rising talent’s “Dope & Dirty” sound!

ZOOM's second headliner Jacob van Hage is also Dutch, hailing from Rotterdam. With his own sound and style he wants to send out a clear signal about who he really is and what to expect when listening to his tracks, mixes and live gigs. Through incredible skills and his intense work ethic, Jacob has risen from humble beginnings to become a world wide recognized name. In 2011, Jacob was seen as the most promising crossover DJ/Producer in the scene by bringing together different styles of electronic dance music. With a monthly residency at Time Out (Awarded as "Most Populair Club in Holland"), he managed to develop his own unique floor driven style and that paved the way for greater triumphs.

Pre-sale tickets can be purchased via Ticketpro for 150 CZK. Tickets on the door will cost 250 CZK.