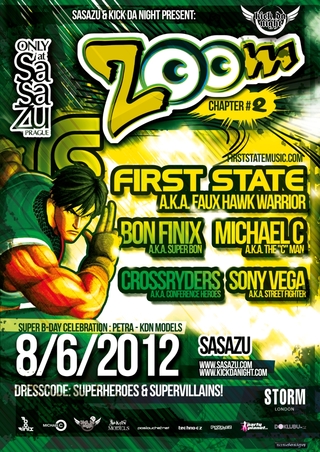 First State is a name that has been tearing up dancefloors at clubs, festivals and events world wide, rocking radio stations on every continent, and dominating compilation tracklists and sales charts over and over again. Their releases and signature "Bashups" are regular features in live playlists and podcasts of the biggest and most influential Electronic Dance Music performers across the globe.

With founder, Sander van Dien at the production heart of the duo, and renown DJ and Producer Shane Halcon added to the equation, the combined forces behind the First State duo will be elevating the name to the next level. First State are famous for multiple chart-topping hits like "Maze" , "Skies on Fire", "My Sanctuary" and many more.

Their initial claim to fame was the track "Falling”, that featured on Tiesto's "In Search Of Sunrise" compilation.This led to the duo making their debut performance ahead of Tiesto in Amsterdam in 2006, which subsequently led to a complete European tour that included a headlining set at Privilege in Ibiza, and another event that saw First State perform as the first ever DJ act at the O2 Arena in London. This set the duo up for a fast and steady rise in the Electronic Dance world.

2011 was a groundbreaking year for First State as both artists progressed to new heights individually and collectively, with performances at significant events like Miami Music Week, A State Of Trance 500, Official Istanbul Formula 1 Grand Prix Pre-Party, The Gallery at Ministry Of Sound, and lengthy tours to Asia, Southern Africa, Scandinavia and North America. Also, taking on the ZOOM decks will be Bon Finix, Michael C, duo Crossryders and Sony Vega.