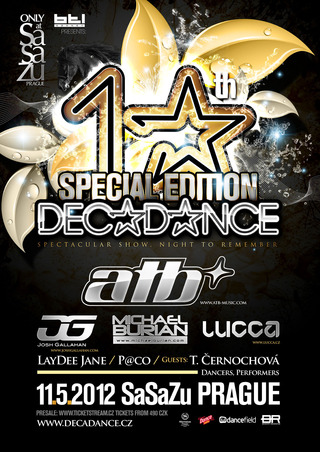 We´ve prepared for you another edition of Decadance party and respecting the fact that it´s going to be the 10th anniversary promoter BTL Agency has decided to host a huge party and bring you a real cherry on the cake!

Club SaSaZu did welcome almost all the world star djs but there´s a one who had never been there yet. Last but not least outstanding name is a german producer ATB who will return for a gig to Prague one year after his warmly accepted gig on 1st Trancefusion party. ATB is the producer of many world known hits and has a huge base of fans all around the globe. His next performance in Czech will be after long time in club and we hardly believe he´s going to enjoy the close connection with his fans as much as he can. Altogether with ATB we proudly announce a performance of his dj colleague Josh Gallaghan with whom ATB co-porduced some tracks. Josh takes part on ATB´s gigs regularly so we can expect they both will be connected on the same music level!

This Decadance edition 10th anniversary will offer you a big show as you´re used to from the past. Special appearance during the night will be held by singer Tereza Cernochova also you´ll have a chance to experience a special musical surprise during Michael Burian´s set and enjoy all the dancers with spectacular costumes, decorations, great technical support, special stage and many more surprises which definitevely do belong to the big party like this.